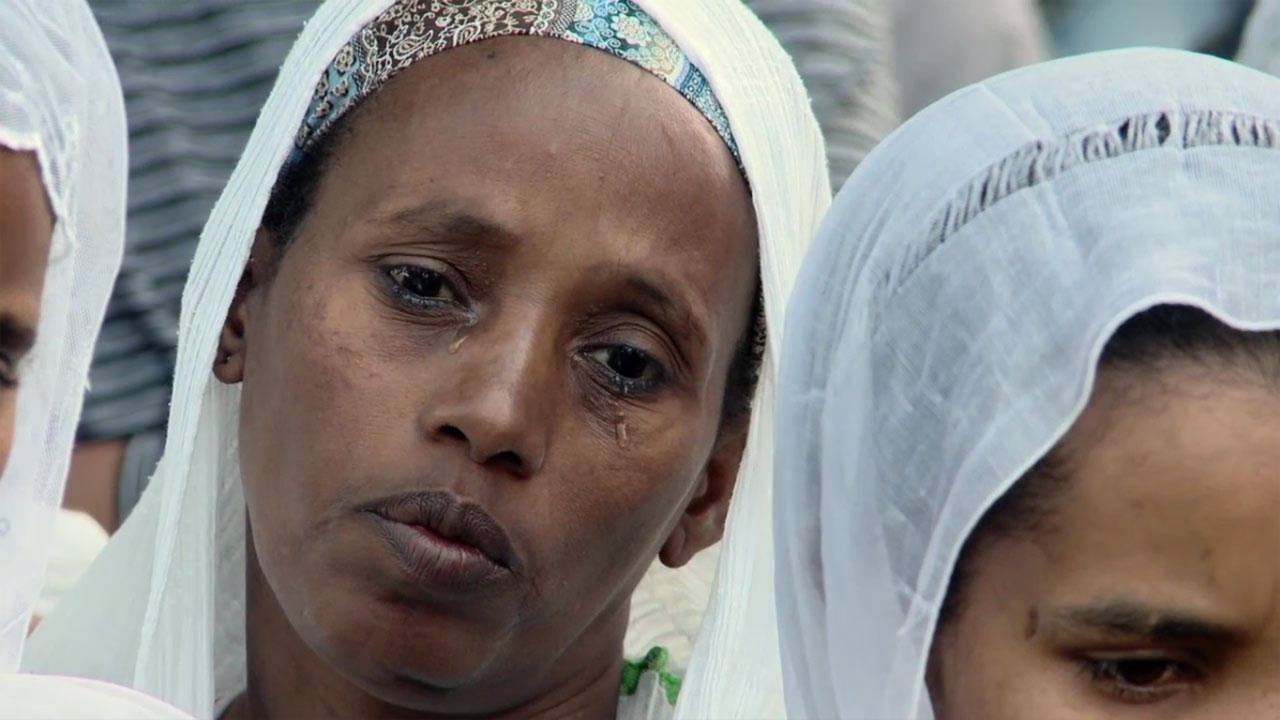 The deadly journey of escape of Eritrean refugees in Sinai desert

When Europe closed its borders in 2006, thousands of Eritrean refugees fled their military dictator-ruled country towards Israel. The only way out is across the Sinai desert in Egypt. There, many are kidnapped by Bedouin smugglers and taken to camps where they are tortured and raped as they are forced to call their relatives begging for ransom for their release.
We follow Meron Estefanos, an Eritrean journalist-activist living in Sweden. On her radio program she talks to hostages in the camps while recording their pleas for help as well as their family members raising money for their release.
We also follow two refugees that made it into Israel in their attempt to save their loved ones lives.
Read a review of the film in our blog

A film by Keren Shayo

Screened in numerous film festivals, among them are IDFA, Goteborg International Film Festival, One World and many others. For a full list, enter the film's website

Keren Shayo // director
Keren is an independent filmmaker residing in Tel Aviv, Israel. She graduated from the cinema department in 'Tel – Hai' College in 2004 and since then has been focusing on social and political issues in her films.  She co-founded the nonprofit organization – 'ActiveVision' that aimed to bring the vision of migrants and refugees as a subject in the documentary act. Her short films 'House Arrest' and 'Ya shdad' have been screened at festivals around the world and won awards. She was the director of photography of various documentaries, among them the award-winning films 'Maria en Tierra de Nadie' and 'Refugees'. In 2013 her film 'Sound of Torture' was premiered at IDFA and was sold to 8 TV channels worldwide.

Osnat Trabelsi // producer
Graduate of the Department of Film and Television at the Tel Aviv University. Chairwomen of the Israeli Documentary Filmmakers' Forum. Owner of Trabelsi Productions, which produces political and social films. Among the films she produced are international award winning films such as Arna's Children (director: Juliano Mer Khamis), Strawberry Fields, Ashkenaz, Pizza in Auschwitz, Jaffa, the orange's clockwork and the original ground breaking webdoc “Gaza-Sderot”. She initiated and directed the first International Human Rights Film Festival in Tel Aviv and Ramallah. In 2007 she was chosen by The Marker as one of 40 women who make change in society.

Meron Estefanos
Meron Estefanos is an Eritrean journalist and human rights activist. She is a presenter for Radio Erena. Ms Estefanos is the co-founder of the International Commission on Eritrean Refugees, an advocacy organization for the rights of Eritrean refugees, victims of trafficking, and victims of torture. Ms Estefanos has been key to identify families through out the world who have been blackmailed to pay ransom for kidnapped family members, and was key witness in the first blackmail trial in Europe. She is a co-author of the books '' Human Trafficking in the Sinai: Refugees between Life and Death'' and ''Human Trafficking Cycle: Sinai and Beyond''.